A good utility to build yours IOS apps, this plugin create MacOs agents for yours builds.

It can stock your Keychains file on Jenkins and send it to the MacOs Nodes.

This plugin has been tested against macOS 10.14 Mojave and macOS 10.15 Catalina , although theoretically it should work with older version as long as it supports sysadminctl command.

'TCP port for inbound agents' must be enabled in Global Security settings.

If not, WebSocket must be supported by Jenkins and activated in the agents (see Web Socket)

Enable SSH for all users

Go to System Preferences -> Sharing, and enable Remote Login for All users :

example of configuration for 10 Jenkins and 1 Mac with 10 users allowed :

For more informations about sshd_config consult the Official Documentation

Create an user on the Mac with administrator privileges. It will be your connection user for Mac Plugin Global configuration.

Add sudo NOPASSWD to this user in /etc/sudoers : see how to configure sudo without password

To maximize security, you can configure it only for "chmod" and "sysadminctl" command used by the plugin :

Since 1.4.0 it is possible to use "dscl" instead of "sysadminctl". To use the full functionnalities of the plugin, here is the new NOPASSWD configuration for the user :

Select JNLP for the connector and refer your Jenkins URL. This URL must be accessible by outside, localhost is not working.

Add a new Mac Host and fill the properties in the fields : 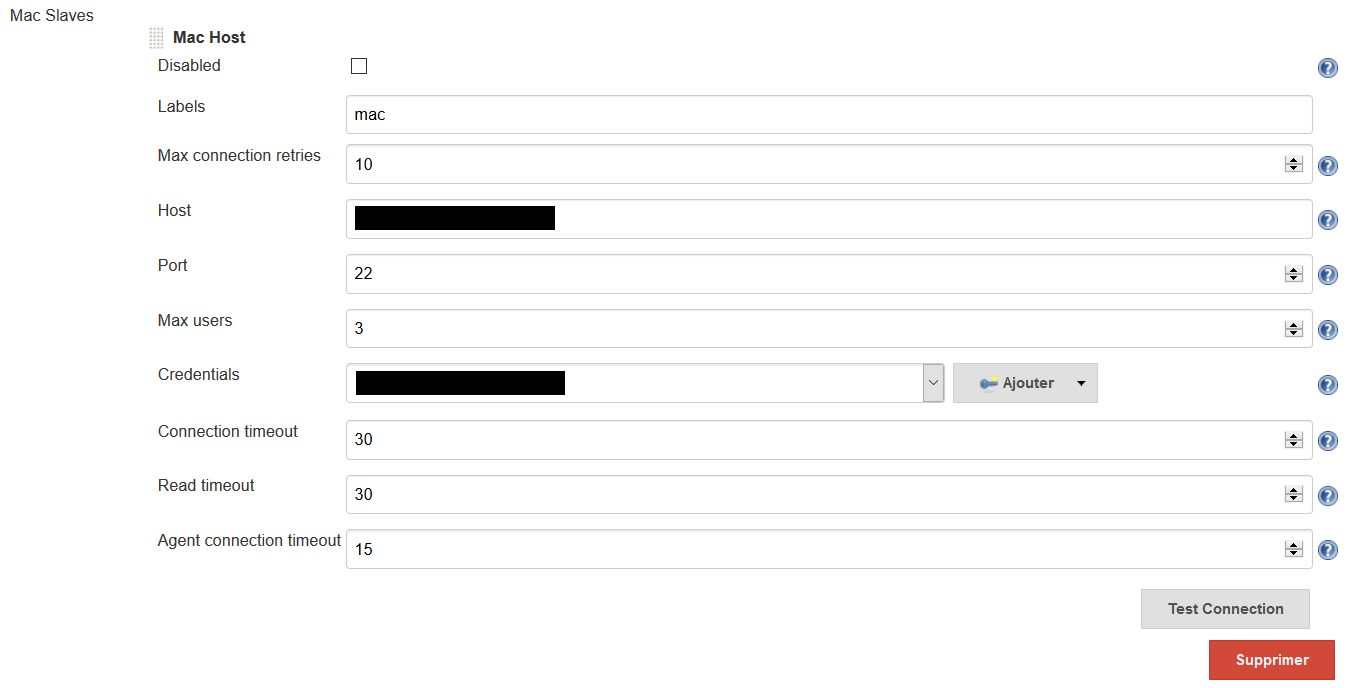 The number of simultaneous builds on the same Mac Host depends of the property "Max users". More you have Mac Hosts configured, more you can build simultaneous on many machines. The plugin was tested with a limit of 7 users per Mac hosts.

The supported credentials for now is User and Password. Put an account of your mac with sudo NOPASSWORD configured (see Configure a Jenkins User).

Refer the label of your agent. Select JNLP for the connector and refer your Jenkins URL. This URL must be accessible by outside, localhost is not working.

In a project configuration, refers the label :

Since v1.1.0, you have the possibility to stock keychain files into Jenkins to inject it in the Jenkins Mac agent. For this, check "Upload a keychain file" :

Add a new Secret file credentials. Prefers to store it as System Credentials to not allow any project to use it directly :

The Keychain will be send to the Mac agent with SCP in ~/Library/Keychains/ directory before the JNLP connection.

Since v1.1.0, you can set environment variables on Mac host. Theses variables will be set on the Node and will be accessible in the build.

Since v1.3.0, you can set commands passed to the user before the agent starts. The field is a multi-line string, and each line match to a command execution. It is possible to run a script on the Mac with this field.

The option is available in Mac Cloud settings :

v1.4.0 include the possibility to choose between "sysadminctl" or "dscl" for the users creation and deletion.

The option is available in Mac Cloud->Mac Host settings :

This functionality has been developed to fix JENKINS-66374

sudoers file on the Mac must be updated to add sudo NOPASSWD on all commands needed to create the user with dscl (see Configure a Jenkins User).

You can define a custom LOGGER to log every output of the plugin on the same place. To do it, go to System logs in the Jenkins configuration :

Configure the Logger of the plugin :

After configuration, when you run a job with a Mac Cloud label, it will create a jenkins agent on the mac you setted as host and run the build on it.

You can see it on the home page of Jenkins : 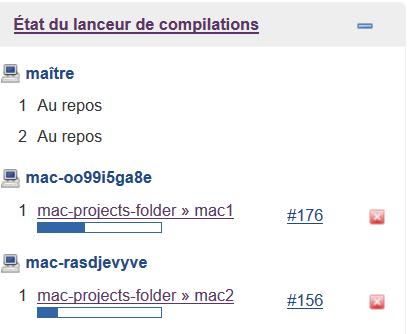 Recommendation : All Mac used with the plugin has to be rebooted at least one time a week to prevent theses problems. This script can be run during the reboot to clean all uneeded users and process :

Since v1.4.0, it is possible to use dscl over sysadminctl (see User Management Tool). Theses issues should not happen with dscl.

Any question ? You can ask it on the Gitter room or open an issue on the Jira of Jenkins.

To propose a change submit a pull request to the plugin page on GitHub.