The Yammer Plugin for Jenkins enables notifications to be sent to a Yammer group on the success or failure of a build.
Yammer Plugin on jenkins-ci.org.

This is an example of a successful build notification sent to the Build Notifications group: 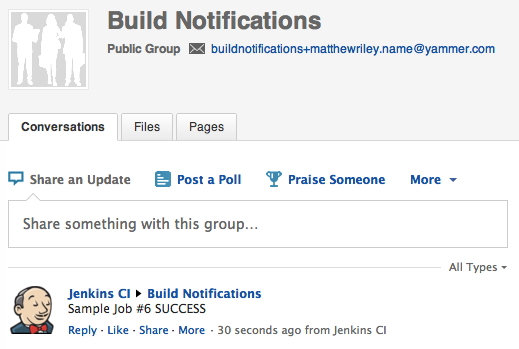 Install the plugin from the Jenkins Plugin Manager. It should be listed as Yammer Plugin under Build Notifiers.

In the job configuration, under Post-build Actions, select Yammer Notification: 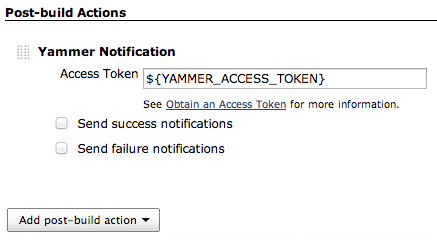 The Access Token defaults to an environment variable named YAMMER_ACCESS_TOKEN under the assumption that the same access token will likely be the same for many, if not all jobs.
For example, you might create a Yammer user representing Jenkins that will act as the source of all Yammer notifications from Jenkins.

With the Access Token set, select whether to send success and/or failure notifications:

Both success and failure notifications require a message and a group name. Environment variables are also allowed.

Please ensure that the Yammer user associated with the OAuth token has been added to the specified groups,
otherwise the post will result in a HTTP 403 Unauthorised error.

The same settings specified in the job configuration can be provided as a JSON file that can be generated during the build. By default, the file should be named yammer.json under the workspace root.

The file path can be changed in the 'Advanced' section of the job configuration.

This content is served from the Jenkins Wiki Export which is now permanently offline and before that a read-only state. We would love your help in moving plugin documentation to GitHub, see the guidelines.

To propose a change submit a pull request to the plugin page on GitHub.